Just so you guys know, i love each and everyone of you. I might have taken some of you for granted as the years passed, but NJ was perhaps, my most treasured memory, because it was the home of A02.

My love goes with you guys, in whatever you guys may choose to do.

And just so you guys know, when i organise future class outings, you guys BETTER REPLY MY SMSES AND GET BACK HERE. I DO NOT NEGOTIATE. YOU CAN BE IN ENGRAND, AMERIKA, EULOPE, CHEENA, YOU BLARDY FLY BACK HERE!

Cheers! Love you guys, good luck for As, its in you. We're the humans class, who else can ace A levels the A02 way? =)

hey i thought i'd be cool to know.. which uni is everyone planning to go? and what course? haha, i'm going to nus lit (of course) unless i change my mind=) 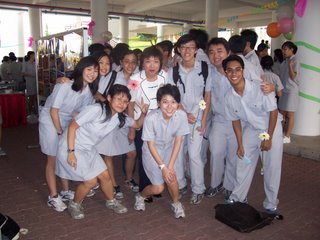 Today was the last day of lessons for A02. I spent my last day tidying up TA13, rearranging the puzzle pieces, clean the class, ensure that the envelopes are clean and unblocked. On the whiteboard, i wrote "This is the Civics Class of 05A02, pls do not rearrange the furniture". It offers me some sort of... something i guess. I miss our classroom already, and the way we made it our home.

I love you guys, everyone of you that made A02, and all the memories you guys left. I like suaning u guys sometimes, oh yes, but that doesnt mean i hate you. I love NJ, i really do. I enjoyed myself thoroughly, and i often wish that JC was a little longer, like 4 years and my RV days reduced to 2.

Here's my little something to all of you, i love you:

Charlene: Youkai was captain of ignis, and so were you. A02 has always produced top, enthusiastic leaders who lead ignis and serve with pride and honor. you were our pride. the way you gave your best for council, ignis, and for A02.. nothing more, you were a leader.

Shermin: Forever jumping, singing, i think the A02 spirit lives in you. personified. your hearty laughter.. something we've missed so much in the leadup to the As, with stress laden on us. HAha, you were always sherman, our brother. =)

Chris and Ruth: This pair goes as one. A twinity. =) i rmb when i first came into A02, both u CTSS girls sat and made the best jokes, and the heartiest laughters. Chris, you were my PW's group leader, and i worked with u for OG. You strike a fine balance between work and play, and im really, really impressed. Rmb, to spray disinfectant on mac's trays! Ruth, my math khaki. MAth always suck so much when youre absent. Nobody to suan mr song, "MR SONG FAN LEH", and trigo just strikes me raw.

Shuzi: I've no doubt that u clash cynbols (HOW TO SPELL ARGH) the best way they shld be clashed. Every national anthem, i can tell if u were the one clashing it. NO LYING!!! and you, forever POPULAR (maybe is acccctttt one) hahah! but PW was damn fun, and u really were meticulous with the WR. omg that nite when we thought the diskette was lost, i still rmb u blaming urself!! NO!!!! 008 loves u! A02 too!

Karen: there are 2 girls i really respect alot. One's called Elgina in HCJC. The other's you. YOu know what you want, you get what you want. And nothing stnads in your way. Such a determined attitude.. few have it. To know what you want, and boldly pursue it, im impressed. and when you try your best, you really do THE BEST.

Sara: everytime i see you, everytime u collect money from me one leh maths rep. haha, but still, i always tell SOME GIRLS in our class to imitate you. Demure, lady like... and you can dance! please when u become some model, rmb that adrian wants to know rui en. thanks!

Judith: From RV, ive already heard your name le. EVEYTIME SOME ENGRISH COMPETITION, YOULL WIN IT GRAWRRR! When i first came into A02, "oh no its that judith. shes going to say some big long long long word that i wont ever understand" hahah! but really, i think you're shuuuuper smart, insightful. i still cannt believe u came from NCC

Shoof: *shoof runs under a computer table, puts her hands in a triangular action above her and says: "house!"* HAHAH OMGGG.. forever laughing, happy. ive never seen u pissed, sad or even angry. whatever life throws at you, you slurp it up wiht a smile. i cant find anyone who can be happier, and more christlike!

ShuQi: I've no doubt that deep down in you, you really are an A02-ian. i dunno if you will read this, but ive a high regard for your work. i saw your PW's final product, and i can only say, im beyond impressed.

SAm: You are brilliant, really brilliant. and you can really write. in whatever you do, your ability will take you thru. you will excel outside school, a caged up system is smtg you will not thrive on, and i think you'll do well.

Steph: Aiyo, rooooocccckkkss! youve got the sian diao look everytime during assembly ahhaa. like "why am i here today?". lemme tell u smtg.. i share the same sentiments! i really admire your love for ur grandma, and for lil kids. quality wife/daughter in law A++ i intro you to some minister when i become pres kays!

Sophie: Who else laughs louder? (okay sorry maybe chris) late nights talking, bitching, who else shares my crazy views other than you! and youll never get my jokes.. (but u improved recently le) HAHAH. and who else believed my scratch cornea joke for as long as u did. sophie ar, you know youre smart de, dont doubt urself! Rmb, you are an Econs S student! thats good enough proof u can handle higher economic concepts! =)

Sheryl: Behind all the class things, you are the one who does all the admin work. and silently too. i dunno how you can cope with all the nonsense, but you really were a good asst CT rep. You know the with the regular offdays i tkae (4-dayweek)... i really needed the help u gave. thanks!

Beng ah: best friend! who else will sit with me and tell me i rock? play the pass-the-problem game. help me find solutions to dilemmas. indulge me in my kingly fantasies, and call me huang ah ma. hahah! when i become president, i decide le, ill help u get ronaldo. but for now XM looks quite good leh... consider? :P

Rhodaaaaa: I dont believe u came from NPCC. nonono! you offer some kinda cynical comments sometimes.. and its usually suaning me yucccks haha! for a short period of time, we were in the same GP class...den no more. pooofff! and you arent fat. you know whats fat? fat is when u look down and u cant see your feet! for me i can only see my toes... haha! stop dieting!

Charmaine: HAHA meimei ar meimei..you and jeff have a 4-year age gap. Jeff's 13 and youre 9. =) still, you're sooooo damn mature. you think logically, and you dont do crazy stuff (like put a wallet on your head, pretend to be a geisha) haha! and youre freaken smart. omg, rmb! im ur pastor when u get married! ill get myself those white robes... dont worry ill look like one!

Liyana: u eat the most bread leh, probably the biggest bread eater ive ever known. haha but still, i've never seen you pissed, or you losing your temper.. even when GP turns out badly. Your self control, run run run and run.. amazing. the one and only canoeist in A02!

BOYS:
Angoose: when i first saw you, i thought u spoke really well, and you looked like those extremely athletic kid. haha then you evolved into my partner-in-bullshiting, lying about the most absurd things to guillible kids (uh hemmmm... u know who u are hahHAH) you were a brilliant OGL to be with, with that really high energy level. lastly, you're the most industrious person ive seen, you will get your rewards, no worries man. we drifted somewhat this year.. still i love yoU!

Jason: I dunno why youre christine's kid. Why ar? hahah i know i suan you alot, but hey, shows youre fun to suan ya? You always have this weird expression on your face when i do, and you look funny and sound funny when i successfully piss you off! hence it is fitting i end this with a suaning... wishing you a happy marriage with HG. =)

BEnny: After a year of manhood lessons, you muster up enough courage to skip geog. I see you've benefitted immensely. haha i think you're witty. You throw back my insults well, and you laguh funny! Benny arrrrr... when u work, you really score darn bloody well. You have it in you, go get it! BE A MAN! and dont send me midnight romantic messages. then u hurt me by telling me it isnt for me... =( hahah!

Kurt: Duh, who else. If you cant find kurt, look into the printing shop. hes usually there making math notes. you've really changed alot since i knew you, and better too. have more confidence man, youre bloody brilliant. ill make you my personal adviser when i crown myself king! =)

Haoguang: Eh, u owe me a Smooth Criminal song. wah laos, i was daaaaammn blown away, i thought no one, humanely, can sing that SONG. you're smart, and i can see youre starting to work super hard. hey, its paid dividends right? The best poets dont HAVE to be gay.. dont date jason ya? =)

All in all, ill miss you guys. 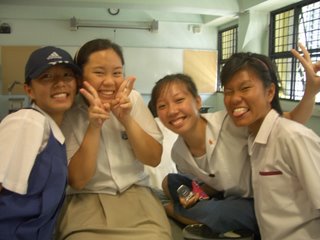 Hey! I realised I haven't posted for a really long time. So here I am!

I watched World Trade Centre today, and I got a lot of thoughts to chew on while watching. There was an old mother, who broke down, because her son went into the Trade Centre with a quarrel as their last conversation. And I realized. I don't want the last memories of A02 be one of one bounded by boundaries that we ourselves subconsiously divide ourselves into, cliques that we once avowed never to change our relationships.

Yes, I admit that there will always be degrees of friendship, but it doesn't change the fact that we are all friends. And let me throw in this cliched thought, What If your life was to end tomorrow? How would you want to be remembered?

Thank you, my lovelies, for teaching me this, and so much more. (:

All the best for A's! 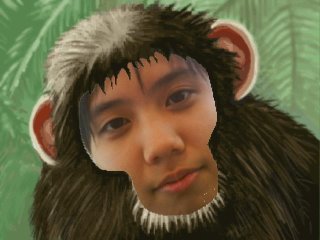