jeff! now you know how prince looks like!
before you go, so qiao! they have the same strand of fringe drooping down, 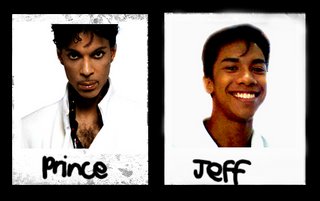 do note that i actually took the liberty of putting jeff's fringe on prince.
KingADRIANthegreat [12:22 AM]

This is loan shark Tan.

Or next time lin bei hang the fish heads on ur door den u come out kanna scareded.

Or i also got a cat la. Then this cat veh good at shitting one, later i share the festive joy then u know ar.

Okay i joke joke nia ar. BUT THE PART ABT PAYING NOT JOKE JOKE.

OH! the Horror! it is her birthday in half and hours time I must do something nasty you see

Jeff and Kurt reliving their past lives

hey guys! i've missed each and everyone of you so much. i mean, even though i've not been hanging out with you guys as often as i would like to (because of my almost-everyday trainings), everytime i'm with the gang, i'll be happy even though i've had a bad day. i feel kind of bad when i'm not around when you guys were feeling down, so let me make it up to you this time. lets think happy thoughts here people:) we'll focus on the positive aspects of our lives ( ie A02:) ), we'll think of ways to make other people happy so that we'll be happy when we see them smile, we'll exude the essence of joy and laughter so that everyone around us will be tempted to pass on this feeling of exhiliration (i'm running of words to transpose for 'happy'. Heh. )We'll be a02.

i love you each and everyone of u.